Phone of the Month: HTC One M9

The HTC One M9 is an Android smart phone. The third generation One was manufactured by HTC. It was officially announced on 1st March, 2015 in a press conference at Mobile World Congress. Later, on 10th April, 2015, it was launched on a wider level for sale. HTC One M9 is a successor to HTC One M8. The dimensions of the smart phone measures to 144.6 millimeters (5.69 inches) in height and 69.7 millimeters (2.74 inches) in width. The total weight of the smart phone accounts for 157 grams or 5.5 oz. Originally the smart phone had the Android operating system, 5.0 Lollipop which was later updated to Android 7.0 Nougat. The system installed on the chip is Qualcomm Snapdragon 810. It operates on Quad core ARM Cortex A57 and quad core A53 (64 bitsupport). HTC One M9 offers its users 3 GB of RAM and 32 GB of internal storage. Along with this, it also features microSD capability which allows about 2 TB of memory to be inserted. The phone offered long lasting battery of 2,840 mAh Li Pro. The touchscreen display of HTC One M9 is about 5.0 inches (130 millimeters). It is Super LCD 3 with RGB matrix and 1920 x 1080 pixels. The rear camera of the phone features 20 MP camera with autofocus, 27.8 millimeters lens and dual LED dual tone flash.

The design of HTC One M9 is similar to that of HTC One M8. The only difference is that M9 has a narrower and thicker build. The phone has accurate IPX3 level protection against spraying water. The HTC Active Pro Case is available to the users with the phone, which gives them IP68 level of protection against water and dust. It has tolerance for even a drop from 2 meters height. The UltraPixel image sensor was moved to the front camera of the phone. This sensor has larger pixels in it, which sacrificed the megapixel size- which was used to enhance the low light capabilities. The rear camera of the phone now uses 20-megapixel sensor, which is more traditional and can be used to record videos up to 4K. In HTC One M9, the depth sensor from its predecessor was dropped as well. This smart phone has ‘BoomSound’ stereo speakers at the front, these speakers use Dolby Audio tuning now. The smart phone can be used as a remote control for gadgets which can be enabled by infrared. This is due to the infrared (IR) sensor which is built within the mobile.

The HTC One M9 smart phone uses Android 5.0 lollipop operating system along with the Sense 7 user interface of HTC. After the phone’s release HTC updated it to Android Marshmallow and subsequently the device was updated to Android Nougat in December, 2016.

The HTC One M9 supports ‘BoomSound’ speakers which give high definition and great sound quality to the listeners and give them the experience of three dimensional hearing. This ‘BoomSound’ is being supported by Dolby which created a virtual surround sound which includes listening with or without headphones. These speakers give the users sound experience like in theatres. The sound quality is much more improved when the listener is listening through the headphones. To enhance and make better the experience of listening, HTC also introduced its own range of ear buds, which allows the users to get the best of this optimized sound.

Unlike, the prior phones of HTC, M9 eradicates the battery issue for the users. Before, the battery used to drain out quickly and the users had to keep an eye on that. HTC One M9 exterminated this problem and introduced Snapdragon 810 chip within the smart phone. This chip is able to use a set of core which operates on lower power. The battery provides 2,840 mAh life to the phone, which is also just a fraction smaller than that used in iPhone 6 Plus. HTC One M9 has also achieved great success for the entertainment portion. Watching videos/movies in high quality and listening to three dimensional sounds- both gives the users a ground-breaking experience. 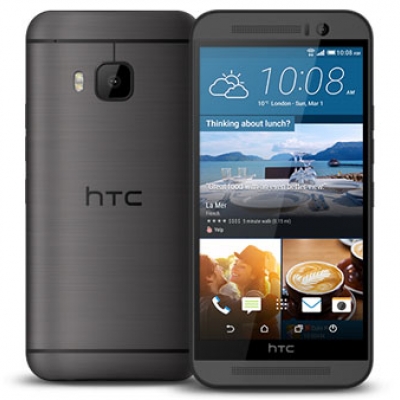