Much has been talked about virtual assistants – most notably Alexa, Google Assistant, and Siri. Their creators and the phone manufacturers that use them put great faith to them and see them as the future of the smartphone world. There is something in a voice-guided, intelligent program that fascinates us. It brings us closer to the future by allowing us to do anything we want without even touching our phone.

In this striving to make the virtual assistant movement a more popular one, companies have been making aggressive moves to prevent us from forgetting about their existence. First, it was Samsung with the dedicated Bixby assistant button, and now it seems that Google is getting its first phone with a separate Google Assistant button – the yet unrevealed LG G7 ThinQ. Let’s take a look at the significance of this and more.

A part of a bigger picture

LG confirmed that their new flagship phone will be called the LG G7 ThinQ and will feature a Google Assistant button. It’s the seventh generation G series phone and is currently shrouded in mystery. The reveal date is scheduled for May 2 in New York. Most people have been baffled by the ThinQ moniker, a name connected to the new AI technology LG has meant to infuse their phones with. The V30 ThinQ was the first phone with this cutting-edge tech, able to conduct a much better symbiosis between our voices and the software. Here’s their announcement on the matter:

“The LG G7ThinQ is an evolution of the foundation laid by the LG V30SThinQ, the first LG smartphone to embrace AI as part of its core features. The V30SThinQ incorporated AI technologies that enhanced the most frequently used features including voice recognition and Vision AI to improve camera convenience. The LG G7ThinQ will offer improved interconnectivity with LG devices such as home appliances, TVs, and more...”

The new AI technology is a perfect testing ground for the Google Assistant, as Google looks to make use of Apple’s Home Pod disaster and take over the virtual assistant world once and for all.

A new age of virtual assistants

It has become known in recent years that turning a virtual assistant on are much harder than actually commanding it when it’s on. While in standby mode, the phone has a slight delay when registering sounds. The introduction of the Google Assistant button is supposed to integrate the ThinQ software and allow you to turn Google Assistant on.

Although many companies want to get rid of buttons as soon as possible, this may not be such a bad move. The pressing of the button will only minimize the amount of time it will take to get the assistant up and running, ready to perform tasks. It’s just the second company after Samsung to do this, but the significance is even more significant now.

Why? Google Assistant is by far the most efficient virtual assistant now and improving it with hardware, and AI software can only be a positive thing for Google and the smartphone world as a whole. This revolutionary new feature is just one spec of a potentially monumental set of items included in the G7 ThinQ. Let’s see what is known so far.

The speculations so far

•    The screen will cover the entire front of the phone, sans a notch at the top.

•    It will feature an all-glass back with additional options for fast charging, fingerprint scanning and a dual-lens camera sitting in the middle of the top side.

•    The notch might be optional, due to a built-in option.

•    Both cameras will be 16MP, with an essential focus on low-light shooting – something which is the weak spot of every flagship nowadays.

•    The hardware will include the Qualcomm Snapdragon 845 processor, along with 4GB of RAM and 64GB of storage space.

•    Due to the ThinQ software, we might be looking at far-field voice recognition. The phone may be able to hear you from up to 17 feet away. 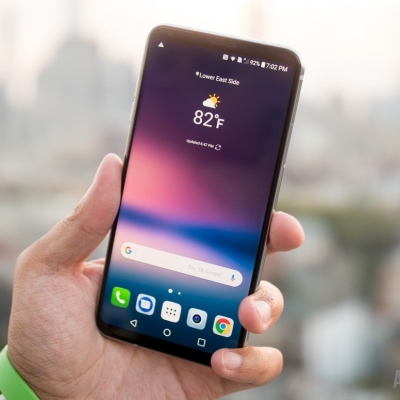